Today's question comes from Erica who is concerned about a feather inclusion near the girdle in a VS2 diamond:

I've been educating myself all weekend about feathers; whether the diamond would be subject to future cracking or not depending on the feather location and extent of involvement, etc. I found one of your articles on inclusions. You were open to questions which I appreciate. See this diamond from Whiteflash. We have it on hold for now. I have since learned a lot more.

You can see the link on that page to the diamond certificate. It has only feathers listed making it a VS2. There are a lot of little ones. Is that worrisome? Should we pass on this diamond and keep looking? I'd hate to spend that much money on a diamond and worry about all these little cracks crumbling the diamond from hitting it too hard one day. We want a 4-prong setting so a lot of the girdle will be exposed.
Let me know what you think!
Thanks.
Erica”

Can feather inclusions in VS2 diamonds pose a durability concern?

So let us first take a look at the diamond that Erica was talking about:

Now, this is a truly beautiful diamond that is absolutely eye-clean. Looking at the grading report one nearly has to strain its eyes to make out the tiny feather inclusions indicated by the red marks. Can you see them? If not, click on the clarity plot and take a look at the grading report. You will see very tiny feathers in the girdle area of the diamond.

As you might know diamond clarity is not only an issue of how good a diamond looks but certain inclusions can also pose durability issues. In the worst case of worst cases this could potentially lead to diamond chipping. Now, in general diamond chipping is a very rare occurrence but it can happen. The risk is increased in cases where there is a feather inclusion reaching the surface of the diamond.

The reason is simply the fact that every inclusion inside a diamond produces a little cleavage plane. Diamonds are the hardest substance on earth and this means they are the most difficult to get scratches on the surface.

However, they consist of a crystalline structure which can be weakened by any cleavage or cavity inside the diamond. Particularly if that cleavage breaks the surface and creates an opening there might be a durability issue. In such a case a well placed blow could potentially cause diamond chipping.

Now, that being said I want to be more precise however: The cleavage created inside a diamond has to be of considerable size to create a durability concern! Only this way can the crystalline structure inside a diamond be weakened sufficiently. VS2 inclusions are very small however and a VS2 diamond is virtually always eye-clean.

The cases that I personally know of in which an inclusion near the girdle or touching the surface has led to diamond chipping are all restricted to I1 and I2 diamonds.

There might be rare cases out there in which even in SI1 or SI2 diamonds had chipped due to an inclusion reaching the surface. But I think that these should be very rare cases.

In any way, I don't think that any VS2 inclusion could ever lead to diamond chipping simply because the inclusion is not big enough. Only a feather that reaches deeply into the stone and touches several surfaces of the stone like the girdle and the crown facet at the same time would pose a serious durability concern. Such large feathers however do not exist in VS2 diamonds.

Basically, you have to be aware that during the polishing process a diamond is subjected to immense forces. In many cases a diamond on the polishing wheel even turns red or begins to glow because it gets heated up so much: 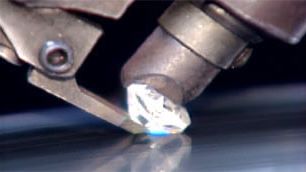 Having “survived” this tough polishing process a diamond inclusion is unlikely to cause durability concerns unless it is a larger inclusion as in I1 or I2 diamonds.

In general a cavity would be more dangerous than a mere feather. A cavity is an inclusion that breaks the surface of a diamond and thus creates a direct opening on a diamond's surface. It is easy to see that such a cavity weakens the crystalline structure much more. Such a cavity directly on the surface can be subjected much easier to outside pressure than a mere inside inclusion.

The above referred to VS2 diamond only has feathers in its clarity plot: 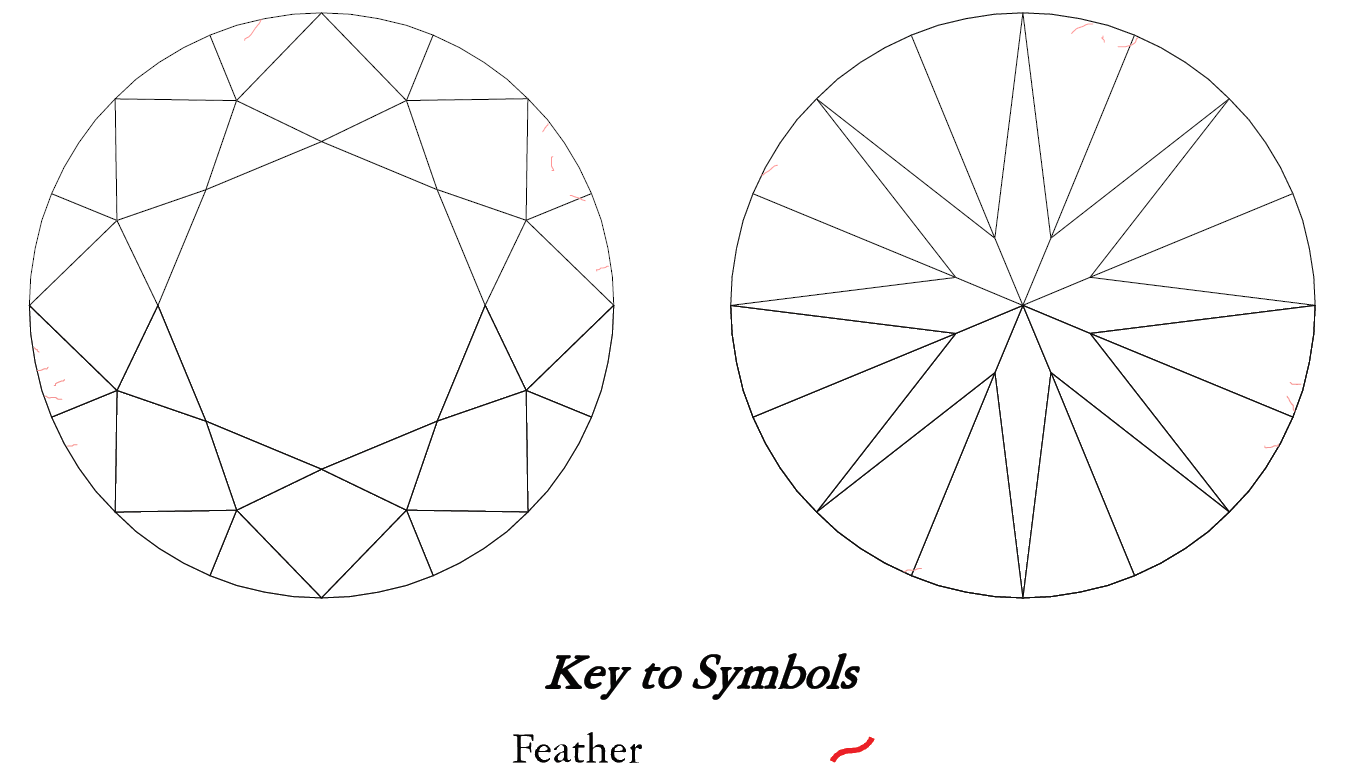 A diamond clarity plot of a diamond with a cavity would look like this:

As you can see though the diamond above is an I1 diamond which is completely different from a VS2 diamond.

If you want to know more details on plotting check out GIA's plotting procedure in detail.

Conclusion of VS2 diamond inclusions and the risk for diamond chipping

For VS2 diamonds feathers definitely do not pose a durability issue.

In general though I think it is safe to say that inclusions in VS2 diamonds do not pose durability concerns.

By the way, the best online vendor to make out inclusions in a diamond is James Allen as it has 360° videos of all its diamonds in up to 40x magnification! This way you can be sure to make out any inclusion!

If you have any question about a particular inclusion in a diamond that you think might pose a durability issue, please don't hesitate to leave me a comment or drop me a mail! I will be more than happy to help you out!

Diamond Query: Fluorescence and Cavity in a 2-Carat Diamond with VS1 Clarity

How to Pick and Choose an Eye Clean SI1 Graded Diamond?

VS2 – The Clarity Grading Win Zone!