So, you finally decided to propose. Congratulations! You’re done with the most nerve-wracking decision. You can now relax, and you’ll be guided through the process. The next verdict is up to her, but you have all the knowledge at your disposal to make sure she’ll say “yes” when the big day comes!

Spending loads of money is always overwhelming, but spending the rest of your life with someone usually overrides the cost. This deep symbol surfs the emotions to splurge on the best of the best as it somehow makes the shopper feel that a perfect ring will up their chances!

There’s also a commonly acknowledged rule that men should spend one to three months’ salary on an engagement ring. For many, this rule poses serious pressure as they feel that they should stick to it to prove their worth as a potential husband even if they cannot afford.

But who enforced this rule anyway? And should we abide by it?

The Two Months’ Salary Myth and the Truth About Diamonds 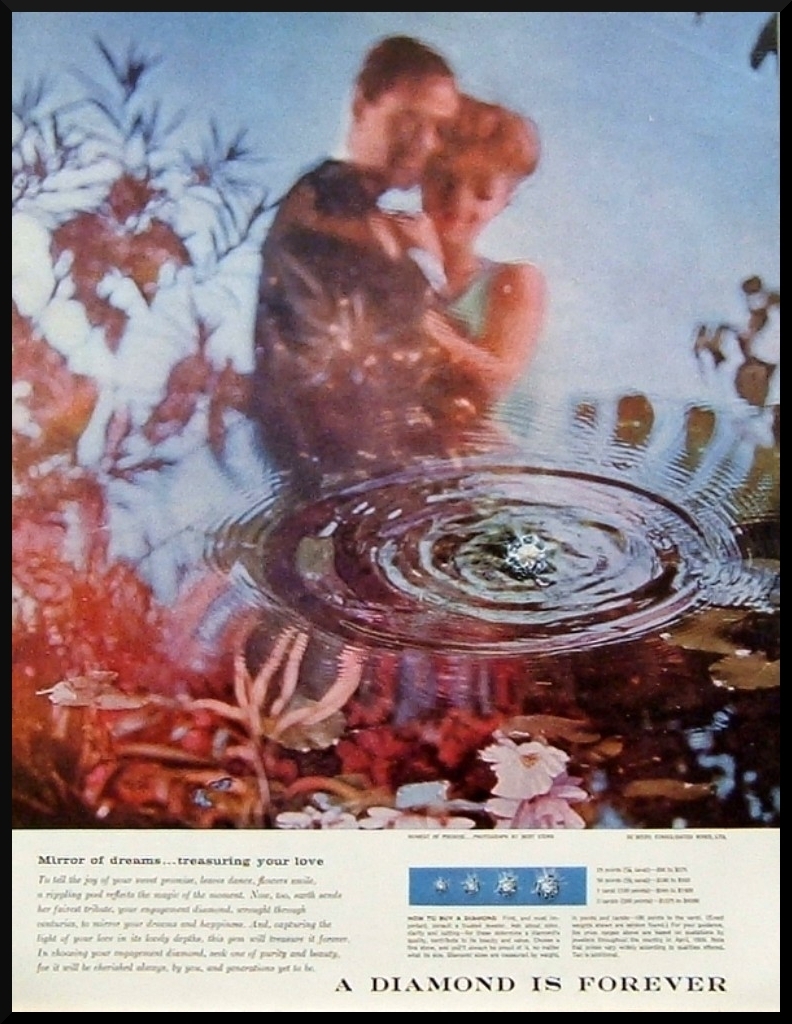 Most people think that the two months’ rule has developed organically and has been passed on from one generation to another.

Some readers even told me that they want to live up to the two months' salary “tradition.” Little do they know that the infamous rule is simply one of the biggest marketing feats of the 20th century! To better understand this, we need to go back in time:

Over the years, this number has shot up to 80%!

Apparently, you belong to the 80% who are not only interested in buying an engagement ring but a diamond engagement ring! But how could the number escalate this high that people now feel inclined to buy diamonds rings for proposals?

Well, We Have De Beers to Thank for It!

De Beers was founded in 1888 and held a monopoly over the world diamond trade till 1970, and it still is a big player. It was De Beers’ main task to perpetuate the impression of diamonds being scarce and thereby, attribute great value to them.

Furthermore, they had to make sure that diamond engagement rings were seen as the only acceptable betrothal gift and sign of love. For this reason, De Beers set up thoroughly executed advertising campaigns aiming at changing the public’s opinion on diamonds in 1939.

Slogan of the Century

They did so by romanticizing diamonds in the media. They featured celebrities in society magazines flashing off their engagement rings.

De Beers made sure that leading newspapers were provided with juicy information about Hollywood stars and their stunning diamonds.

Over the years, this led to a significant increase in sales till it’s popularity peak in 1947 where the ingenious slogan “A diamond is forever” was born.

It was even coined the “slogan of the century” by the prestigious Advertising Age magazine. The success of this slogan can already be measured by the fact that De Beers still uses it today!

Looking for opportunities to generate even more revenue, De Beers then launched an advertising campaign that would make men spend more money on engagement rings.

They decided that men should spend the equivalent of a two months’ salary:

De Beers structured their advertisings accordingly and put out ads depicting couples in the most romantic backdrops with a line that reads, “When you are planning on spending a lifetime together, two months doesn't seem like much at all.”

Indeed, it doesn’t seem much compared to forever, so the reader will often subconsciously agree. But honestly, we’re being played with numbers because the two-month salary is being contrasted with a lifetime spent together. De Beers is actively exploiting the contrast effect which is one of the strongest human cognitive biases!

Now, have a look at this piece of clever marketing:

It’s so good, it sends chills up the spine! There’s no doubt that De Beers knows how to appeal to man's deep-seated desire for love and contrast it with the seemingly small sum of a two months' salary. Here’s another one!

The truth is, advertising campaigns like this have been going on for decades. And they have succeeded in changing the public’s opinion on how much to spend on an engagement ring. Yes, a diamond company had convinced the world to spend a certain amount of money on engagement rings. I know, it sounds crazy!

I am not advocating this, but it’s also not bad. It’s actually fine if you’re aware that the two months’ rule was nothing but a brilliantly executed advertising campaign. You should feel no pressure to spend such a large sum of money. And if you can afford, spend wisely!

Don’t Get into Debt for an Engagement Ring

The main rule when it comes to engagement-ring budgeting is to not be in debt! Once you are engaged, there will be other important things like the wedding ceremony that you need to take care of.

If you manage your finances well, you’ll be able to purchase bigger items like a house and a car or invest in business much smoother. Thus, it is your future wife who will directly profit from you not having any debts! And so far, I have never heard of a woman who would prefer her future husband to be in debt so that she can have a gorgeous engagement ring.

Going for an expensive ring is not the only way to show you care!

Plan a one-of-a-kind proposal. Or opt for colorful gemstones with unique properties instead of a diamond. You may also go for your family’s heirloom to make the engagement more significant. I suggest you choose an affordable engagement ring or wait some time until you have saved enough money for a diamond if you really want one.

The Average Person’s Spending on an Engagement Ring

According to The Knot’s 2017 Jewelry & Engagement Study where they surveyed more than 14,000 engaged and just-married couples in the U.S., the average spent on an engagement ring is $6,490! With the average American earning slightly over $3,000 a month ($37,000 a year), it becomes apparent that they are spending around two months’ salary on the engagement ring. But does that really help you?

You could be earning way more or way less. You could also have a huge inheritance and not earn any money at all. What I am driving at is that it doesn’t make sense to stick with the two months’ rule or with the average spending amount for an engagement ring.

While the statistics urge you to go big, it doesn’t serve as the official barometer for engagement ring pricing. Every couple has their own story, and how much you spend on the ring is purely subjective.

Alternative Ways to Set your Budget

What am I suggesting then? I am leaning more towards to a budget that feels good to you! I think the best way to gauge it is to ask yourself if you would change your lifestyle once the engagement ring got lost, and you would have to buy a similar engagement ring all over again. Obviously, it could take you several months or even half a year to purchase it.

The crucial question is whether you would have to change your lifestyle to save enough money for the same engagement ring. If the answer is yes, then you are most likely overspending. And you might want to consider spending less money on it. The most important thing is to decide for yourself and not let society nor the internet influence your decision.

A Little Trivia if You’re Planning to Spend Less

On the other hand, buying an engagement for less than $500 also contributed to higher divorce rates. You see, it really doesn’t matter how much you spend on an engagement ring! It’s the last thing that could influence the happiness of your relationship. For this reason, you should only spend an amount that won’t give you sleepless nights, but just right for you to have a comfortable future.

Where to Buy Engagement Rings

If you’re keen on spending less, maximizing a strict budget, or saving money but still maintaining quality, you should learn about the diamond 4Cs and only shop at renowned online diamond stores.

One of the best places to buy engagement rings today is James Allen. They’re the only online store that will let you view ALL of their diamonds in high definition 360° videos in up to 40x magnification:

By being able to view the diamond from all sides, you can choose an eye clean SI1 or SI2 diamond to get the biggest bang for your buck. With this, you wouldn’t need a societal indicator on how much to spend on your engagement ring. What matters is it’s a great value for money!

Should you have any question, feel free to drop a comment below. Or email me here!

My advice is free. 🙂

How To Design a Diamond Engagement Ring Online

What is the Average Diamond Size for an Engagement Ring?

When is the Best Time to Buy an Engagement Ring?